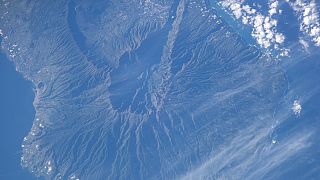 Caldera de Taburiente and Cumbre Vieja on La Palma, where Spanish authorities have evacuated some residents due to a volcano threat

People with reduced mobility began to be moved off the Spanish-owned Atlantic island of La Palma on Sunday as experts warned of stronger earthquakes and the sustained threat of a volcanic eruption.

While government experts said that an eruption is not yet imminent, there has been an intensification of earthquakes near the surface of the island, which is part of the Canary Islands.

A 3.8-magnitude quake was recorded on Sunday as vibrations from the seismic activity were felt on the surface.

The Spanish Volcano Risk Action Plan’s scientific committee said that stronger earthquakes “are likely to be felt and may cause damage to buildings”.

The committee also pointed out some isolated locations at risk from landslides.

Spanish officials ordered the evacuation of residents with reduced mobility from villages as a precaution. Some will be taken in at a military outpost on the island. Emergency services are prepared to evacuate around 1,000 people if necessary, authorities said.

La Palma has been on alert for the past week, after geologists reported an accumulation of molten rock under Cumbre Vieja, a dormant volcanic ridge near the island’s southern tip. Its last eruption was in 1971.

Spanish geologists have been tracking the buildup of an “earthquake swarm” around La Palma for a week. An earthquake swarm is a cluster of quakes in one area during a short period, and can indicate an approaching eruption.