Explainer: How the German elections work 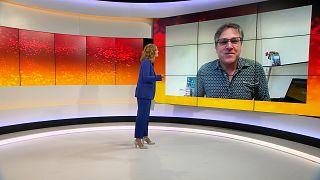 On Sunday the 26th of September, Germany will elect a new parliament. More than 60 million people are eligible to vote. They each have two votes. The first vote is for a candidate from the voter’s constituency. Each party can nominate one person. Whoever gets the most votes receives a direct mandate and enters the Bundestag. This results in 299 Members of Parliament and thus every constituency is represented in the Bundestag.

The second vote is for a party. It is even more important than the first vote because it decides the majority in the Bundestag. To help German voters decide on the party that represents them the most, Daniel Kraft from the Federal Agency for Civic Education tells us about an online application, the ‘Wahl-O-Mat’ that is acting as a voting decision aid. He helped to get it online.

The ‘Wahl-O-Mat’ compares one’s own political positions with the positions of German political parties. A total of 38 out of the 40 parties running in the election took part in ‘Wahl-O-Mat’. “You click through this online application and keep comparing yourself to their positions and standpoints, and in the end you are told which party is closest to your own view”, Kraft explains.

Kraft says that the ‘Wahl-O-Mat’ is fast becoming “a popular sport”. In the last German federal elections in 2017, it was used by around a quarter of all the eligible voters, that’s 15.7 million people. To Kraft, it’s great that an information service like the ‘Wahl-O-Mat’, “which does nothing but discuss issues”, is so popular. “This shows that if you a pproach politics in a playful way, then all of a sudden even party programmes are exciting and worth reading.”

In regards to the distribution of seats, first, the candidates who were directly elected by their constituencies get their place, then those on the national lists. However, if the distribution of seats does not match the proportion of second votes, there are adjustment seats until the ratio is correct. As a result, there are always more Members of Parliament in the Bundestag than the 598 seats. For instance, in 2017, there were 709 Members of Parliament. In this election, there are expected to be even more.