Fossil fuels must remain in the ground to keep warming below 1.5°C, study says 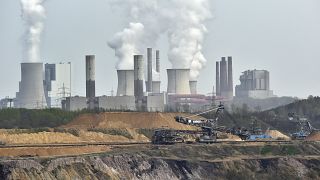 In this April 3, 2014 file photo giant machines dig for brown coal at the open-cast mining Garzweiler in front of a smoking power plant near Grevenbroich, Germany.

Global oil and gas production would need to decline by 3% per year in order to limit global warming to 1.5°C, University College London (UCL) researchers said.

But current fossil fuel extraction projects are not on target to meet this limit as was set out by the Paris Climate Agreement.

Instead, many regions have reached “peak fossil fuel production” meaning an increase in one area would need to be offset by a decline in another area.

Nearly 60% of both oil and fossil methane gas and almost 90% of coal must remain in the ground by 2050, the study, which was published in Nature on Wednesday, said.

Even more dramatic cuts are likely needed, however, as the study was based on a 50% probability of limiting warming to 1.5°C this century.

“Increasing the likelihood of reaching this target would require an even more rapid decline in production and more fossil fuels left in the ground,” a statement from UCL said.

“We stress that our estimates of unextractable reserves and production decline rates are likely underestimates,” lead author Dan Welsby, from UCL’s Institute for Sustainable Resources said.

“However, assuming the political will is present to fulfil the commitments made in Paris, the reductions in fossil fuels suggested in our work are entirely feasible.”

The research came on top of several reports that have indicated that fossil fuel cuts are required to limit warming.

Research released in 2015 found that reducing warming to 2°C would require that 33% of oil reserves, 48% of fossil methane gas reserves and over 80% of coal reserves remain in the ground.

The most recent Intergovernmental Panel on Climate Change (IPCC) report also warned that limiting global warming to 1.5°C could be out of reach.

“Global warming of 1.5°C and 2°C will be exceeded during the 21st century unless deep reductions in CO2 and other greenhouse gas emissions occur in the coming decades,” the IPCC summary for policymakers said.