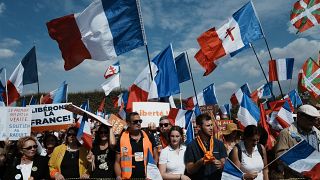 Protests against COVID-19 health passes are held across France every weekend.

Doctors and scientists in France have demanded more protection against online insults and threats.

Health professionals say they have regularly been targeted by death threats since the start of the COVID-19 pandemic.

The group has accused the French government and judiciary of not taking action against those responsible, as well as the spread of misinformation.

The demands were made by the professional union UFMLS, which represents French doctors in private practice.

“We have been receiving death threats every day for months,” said Jerome Marty, a doctor, and president of the UFMLS.

“We are launching an appeal before something serious happens,” he added at a press conference on Tuesday.

“What we fear is not so much the threats to us personally …[but that] an anonymous doctor, an anonymous nurse, an anonymous scientist, the people fighting today in the face of the crisis … will be assaulted by someone who takes action.”

The union said that the threats made online or by telephone have increased following France’s decision to roll out a mandatory COVID-19 health pass.

Tens of thousands of people opposed to health passes needed to access restaurants, cafes and other gathering spots, including some opposed to COVID-19 vaccinations, march in cities around France each weekend.

Karine Lacombe, head of infectious diseases at a Paris’ Saint Antoine Hospital, has also condemned the threats that had been sent to her.

“What shocks me is the impunity that the people who lit the fuse on purpose benefit from, to disturb an established order, to disturb what scientists say, and make the population waver,” Lacombe said.

“I filed a complaint in April 2020, nothing has changed, everything is getting worse”, said another doctor in Metz, Damien Barraud.