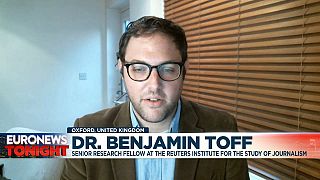 Dr. Benjamin Toff, Senior Research Fellow at the Reuters institute for the study of journalism, on Euronews.

The public’s trust in news in the UK, US, Brazil, and India has seemingly decreased, according to a new report by the Reuters Institute published on September 9.

The study, carried out over three years and examining data collected from the four countries, revealed that while there is still a lot of distrust in news outlets, the wider picture is more nuanced.

Dr Benjamin Toff, Senior Research Fellow at the Reuters Institute, told Euronews that “most people have selective trust in some news organisations, but not others. And they should.”

“What we focus on in our report are ways that people go about deciding what sources they do and do not trust, the large segment of people in each country who we call the “generally untrusting” who do not trust most or even any of 15 different news organisations we asked about,” Toff said.

But the Reuters Institute researcher added that untrusting groups aren’t necessarily the most vocal critics of news.

“Instead, they are much less interested and engaged with news as well as politics more generally. They have fewer experiences conversing directly with or knowing any journalists, and they are less interested in engaging with the editorial practices surrounding how news is made,” he noted.

One of the key findings of the report revealed that while news outlets’ transparency about how sources are selected or how news organisations make their money is important to most people, the “generally untrusting” will pay less attention when deciding what sources to trust.

The report also noted a high degree of distrust towards news on social media platforms and messaging apps.

“In the UK, the percentage of people trusting news on Facebook or WhatsApp was about the same as the percentage who said they trust information from The Sun, which doesn’t exactly have a great reputation when it comes to factual accuracy,” Toff added.

“What is interesting though is that mostly these gaps in trust are driven by people who do not use the platforms for news. These platforms probably impact trust in more subtle ways, since we also know that people have a difficult time remembering the sources of news they click on.”

The Institute hopes to work with news organisations in the future to test possible interventions around building trust.

Watch the full interview with Euronews anchor Alasdair Sandford in the player above.

Click here to access the print version. Fill the grid so that every row, every column and every 3x3 box contains the...
Read more
Related news
Recipes

Click here to access the print version. Fill the grid so that every row, every column and every 3x3 box contains the...
Read more
- Advertisement -