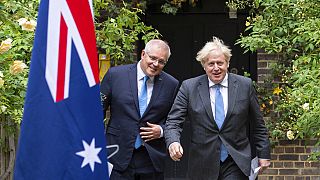 The British government has denied allegations that it gave short shrift to its climate commitments in order to help conclude a post-Brexit trade deal with Australia.

According to a leaked email from a government official cited by broadcaster Sky News and Greenpeace, three senior ministers — international trade secretary Liz Truss, business minister Kwasi Kwarteng and Brexit minister David Frost — agreed not to mention explicitly in the text temperature targets set out in the 2015 Paris Agreement.

But any suggestion that the trade deal would not adhere to essential climate commitments was “totally false,” a UK government spokesperson told AFP.

The “ambitious” trade deal with Australia would include an important clause on climate change which reaffirms the commitment of both parties towards the Paris Accord and to reaching its objectives, including limiting global warming to 1.5 degrees Celsius, the official insisted.

The Sky News report claims that the UK government gave in to pressure from Australia and dropped references to specific temperature targets from the deal, including only a general reference to the Paris accord.

According to Greenpeace, British Prime Minister Boris Johnson wrote to NGOs in August to assure them that the trade agreement with Australia would not come at the expense of the environment and would mention “multilateral environmental accords, including the Paris Agreement”.

It now accuses the government of lying, and of totally undermining confidence in Johnson’s administration as host of the next UN climate conference, COP26, in Glasgow in November.

John Sauven, the executive director of Greenpeace UK, said the negotiations should have been an opportunity for the UK to take the lead and press Australia into accepting the need to commit to climate change targets.

“It’s an absolute disaster that the UK government has caved in in this way,” he added, explaining that it was “absolutely critical” for Australia to commit to measures to curb the climate emergency because otherwise China and developing nations would be less inclined to act.

The United Kingdom and Australia agreed in June on the broad outline of a post-Brexit trade deal, following free trade agreements struck with the European Union and Japan. The fine detail is still to be announced.

Greenpeace castigated the agreement at the time as being below its stated ambitions over the climate, for aligning itself with a country “very late” on climate measures and which had done “nothing” to avoid chaos resulting from its deforestation and regular use of hormones and pesticides.